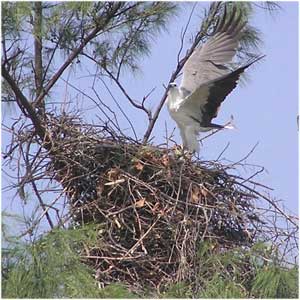 The Whitebellied Sea Eagle (Haliaeetus leucogaster) is thinly but widely distributed and is listed as vulnerable in the Indian Red Data Book.

No data on the status and population of this species is available. Its present status, along the 164 km coastline, in the Ratnagiri district, Maharashtra, is given on the basis of a survey undertaken in the district during 1996-97 and 1997-98. We located 62 nests during our survey.

The species is resident along the seaboard and offshore islands from about 19o N of Mumbai down the west coast and up the east to Bangladesh. Laccadive island (now Lakshadweep), Sri Lanka, Andaman & Nicobar Islands and is vagrant in Gujarat (Ali & Ripley 1978).

We undertook a survey to determine the present status and distribution of the whitebellied sea eagle in Ratnagiri district, as the species is found throughout the coastline of this district.

Ratnagiri District is situated in the Konkan region of Maharashtra State (16.30o - 18.04o N and 73.02o - 73.52o E). The coastline of the district is about 164 km long and is uniformly rocky and shallow. Various bluffs and promontories enclose small sandy beaches, interspersed by estuaries of the more important rivers and the mouths of numerous minor streams. Average width of the district is about 64 km. We surveyed the coastal line, which is 5 to 7 km wide.
The Konkan region experiences a hot and humid maritime climate with plentiful rain during the monsoon (June to September avg. 3000 mm). The mean annual temperature ranges from 22oC. to 30oC. The mean relative humidity is 80 percent in the region.

The eagle which affects the sea coast, and tidal creeks and estuaries is seen occasionally a few miles inland along tidal rivers and at freshwater lakes (Ali & Ripley 1978).

The nests were located while walking along the coast and collecting information from the locals by showing them pictures from the PICTORIAL GUIDE TO THE BIRDS OF THE INDIAN SUBCONTINENT (Ali & Ripley 1995) and THE BOOK OF INDIAN BIRDS (Ali 1996). All the nests were visited in the nesting season and photographs taken wherever possible.
According to Ali & Ripley (1978), the breeding season is October to January. However, we observed courtship and nest building from mid-September to January. Well-grown chicks were seen in the nest up to the end of March.

Height: Most nests located were 20-40 m high, in lofty trees. Only one nest was found below 10 m i.e.7.5 m at Velneshwar, Taluka Guhagar (Approximate measurements were taken).

Nest material: At Rohile, Taluka Guhagar the nest was made of sticks of Ficus bengalensis, Carissa carandas, Leea macrophylla, Crorolaria verrucosa, Loranthus longifolia, Bambusa arundinacea and other unidentified tree species. Exceptionally one nest stick was 86 cm long and 2.86 cm thick.
Pieces of net, plastic paper, bits of woven bag were also used. Green leaves of Mangifera indica, Casuarina equisetifolia, Ficus bengalenses, Grewia asiatica, Smilax macrophylla, Sapindus laurifolius, Bombax malbaricum were used to line the nest. The nesting trees of the eagle as observed by us are given in Table 1.

Territory: Ali & Ripley (1978) define territory as, "usually a single pair with vast territory, but not uncommonly several pairs and nests on the same island".
In our survey, we have seen two nests at a long distance from each other. At times we found more than one nest in a small area. In Guhagar 3 nests (nest no. 17 to 19), and at Kashali village, Taluka Rajapur 3 nests (nest no. 51 to 53). In these two villages we have seen nests hardly 1 km apart from each other.

At Narvan, locals said that the eagle sometimes take poultry. At Jaitapur, local fishermen said that they get indications from the eagle's calls about availability of fish in the sea, and at times also scare the eagle to drop its prey and eat the fish.
Local names: Ali & Ripley (1978) give the local name as Kankan. It is also refered to as Sheshari in other regional (Marathi) books. Besides this we have found some more local names. In Ratnagiri district, this eagle is called as ghar (Kite) and not garud (Eagle). The other names used by locals are given in Table 3.

Hunting: Two rare hunting incidents by locals were recorded. One was on White Sandy beach at Ratnagiri, while two birds on nest were killed for sport 4-5 years ago. Second in Tavsal, Taluka Guhagar, one bird was killed for sport.

Mango trees: Out of 62 nests in the district, 20 nests are on the Mango tree (Mangifera Indica). The spraying of insecticides on mango trees and nesting activity of the eagles starts in October. Due to the fear of attack from eagles the nests are first destroyed and then the spraying is begun. This causes loss of eggs or chicks. Cutting of tree also deprives the bird of suitable large nesting trees.

Nest distribution in the Talukas: We surveyed the white-bellied sea-eagle in 5 talukas of Ratnagiri district namely Ratnagiri, Guhagar, Rajapur, Dapoli and Mandangad, covering about 164 km of coastal area. Out of 62 nests, there were 20 nests in Ratnagiri, 15 nests in Guhagar, 13 nests in Rajapur, 8 nests in Dapoli and 6 nests in Mandangad.

A summary of the bird's nesting activity is given in Table 4.