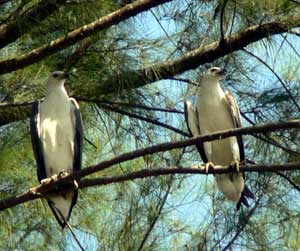 The whitebellied sea eagle (Haliaeetus leucogaster) is a thinly distributed but widespread species.

The Red Data Book on Indian Animals (ZSI 1994) has listed this species as vulnerable. We carried out the status survey of this species in Sindhudurg district from October 99 to February 2000. In our survey we have found 32 nesting sites of this eagle on 121 km coastline of the district.

We located nesting sites of the whitebellied sea eagle by walking along the coastline of the district during the breeding season (October to January). We also collected information from local people by showing them pictures.

Sindhudurg district is situated in Konkan region of the Maharashtra state (15o 35 N to 16o 33 N and 73o 18 E to 74o 13 E ). The coastline of this district is about 121 km. Avarage width of the district is about 64 km. We restricted our survey to a width of 5 km along the coastline. The Konkan region experiences a hot and humid maritime climate with plentiful rain during monsoon months, i.e. June to September (average 3000 mm). Average temperature ranges between 22o C to 35o C. The mean relative humidity is 80 per cent in the region.
This eagle affects sea coast, tidal creeks and estuaries. It is occasionally found a few miles inland along tidal rivers and at freshwater lakes (Ali & Ripley 1981).

We have found eagle nests on seven tree species: Mangifera indica, Casuarina equisetifolia, Ficus bengalensis, Cocos nucifera, Sterculia foetida, Alstonia scholaris and Bombax malabaricum.
Out of 32 nests in Sindhudurg district, there are only 2 nests on Mangifera indica, as compared to 20 out of 62 in Ratnagiri district. Heavy cutting of local old mango trees for Alphonso (Mangifera indica) plantation may be the reason behind this huge difference. The difference is however offset by Casuarina equisetifolia plantation (20 nests, i.e. about 63%).

Most nests were found at a height between 10-30 m (28 nests) while 3 nests found below 10 m height. One nest was located between 30 to 40 m. We located 32 nesting sites, saw 45 adult birds on 27 nests and two chicks on two nests. No bird was seen on one nest but we found fresh droppings and remains of their meals (bones, snake skins) under the nest. A small amount of fresh dropping was seen under four nests. Thus we found 4 inactive nests and 28 active nests (with either adult birds sighted on the nest, nestlings or plentiful droppings on the ground). The average active nest density is one nest per 4.32 km. In Ratnagiri district there were 45 (year 1997-1998) active nests within 161 km, average one nest per 3.57 km.

Out of 32 nests, 30 nests were within 500 m from houses. The locals know the eagle as Kakan and do not have any trouble from them. Local fisherman said that they get indications from the eagle's call about availability of fish in the sea or change in the wind direction.

There is no report of hunting of this bird in the study area. Out of 32 nests, 23 are on private property and 9 on government property. 9 government owned trees bearing nest are supposed to be safe.

Some trees are considered by villagers as sacred. Mangifera indica at Hurshi, Taluka Deogad and Bombax malabaricum at Sarjecoat, Taluka Malvan are among the holy trees, and there are eagle nests present on them. The villagers protect these sacred trees thus indirectly protecting the eagle as well.

The Sindhudurg district is famous for Alphonso (Mangifera indica) and Cashew (Anacardium occidentale) and large areas are under plantation. In the last 15 years this has increased. Due to spraying of pesticides, removal of vegetation within the plantation and other related activities the eagle does not get safety and privacy in the nest. There are 4 nests on Coconut (Cocos nucifera) trees. For plucking coconuts, the person is required to climb up the tree. For fear of attack by the eagle, they first destroy its nest and then collect the coconuts.

Ali and Ripley (1981) give the whitebellied sea eagle's territory as "usually a single pair with vast territory but not uncommonly several pairs and nests on the same small island." In Sindhudurg district we have generally found nests with vast territory, but at Tondoli, Taluka Malvan three nests were found in the same village.