Pangolin Conservation with The Habitat Trust

The Habitats Trust (THT) is founded by Roshni Nadar Malhotra, CEO of the $8.1-billion HCL Corporation is aimed at creating long-term strategic partnerships that can help secure India's natural wealth for future generations. The Habitats trust supports through ‘Lesser Known Species Grant 2018’ for the ‘Conservation of Indian Pangolin through community participation in Konkan region of Western Ghats, Maharashtra, India.’

The Indian Pangolin (Manis crassicaudata) is a unique mammal having the rigid keratinized protective scale around their body. The Indian Pangolin has been categorized as Endangered species as per IUCN Red List of Threatened Species (Baillie, J. et.al 2014) and is in Appendix I of CITES. Anteater the common name of the species according to its major diet of the species consists of ants and termites an adult pangolin can consume approximately 70 million insects annually which play a vital role in the ecosystem. Indian pangolin is shy, nocturnal, solitary and fossorial species arguably the least studied species due to which scientific literature revealed no valid information about species ecology, habitat, breeding biology, and distribution in wild in the region. The illicit trade for its scales and dead pangolin is the operational in the Konkan region of the Western Ghat has been noticed through repeated incidences. It is believed that a scale of the pangolin used in aphrodisiac traditional medicine leads this massacre but no scientific evidence support this. The meat of the pangolin is a delicacy in some country such as China and Vietnam due to the high demands for the pangolin meat and scales become one of the highly trafficked species in the International market. Trafficking incidences and absence of valid scientific information on species ecology, habitat and distribution of the species in this region prompted SNM to pioneer Pangolin conservation through community participation in Dapoli, Sangameshwar, and Mandangad block of Ratnagiri district, Konkan region of Maharashtra, India. 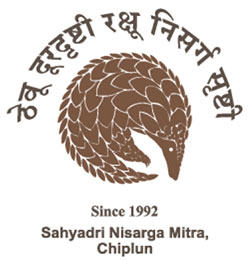 The theoretical framework will be undertaken by considering the CAP drafted by the IUCN-SSC’s Pangolin Specialist Group. The CAP has stressed the need for understanding the Pangolin strongholds as well as its home range, movement, and spatial and temporal movement in so-called ‘Pangolin hot-spots’ on a very high priority. It also highlights the need for effectively protecting the healthy Pangolin populations in the wild. It also urges to educate the local communities and gain their support for the Pangolin conservation.

To understand pangolin ecology, distribution and home range SNM initiated a questionnaire survey of the villagers to gain baseline data about species and awareness level in the region. During interaction with the community, SNM identified local forest dweller and tribal who inform about species burrow or species active region through their traditional knowledge.

According to the questionnaire survey baseline data and traditional knowledge of tribal or local forest-dweller camera trap deployed. Camera trap will reveal the data about pangolin present status, ecology and distribution in the region which allow us to better understand species conservation need.

Education and awareness in educational institute through lectures, videos, and various competitions will help in the long-term conservation of the species through future generation.